Tauriel: Keep her, change her or remove her?

I don't really follow the film lore, but I was under the impression (so far) that Jackson considered Tauriel a not-Sindarin Silvan elf.

Depends what you consider as Sindar. Nandor or Laiquendi are also found under the Sindar category, though after Denethor's death they preferred to have their king from their main Sindar group. So Thranduil and Legolas are definitely "the main Sindar".

Also, by the Third Age the Avari (those that weren't captured and changed into Orcs) were pretty much melted into what is known as Silvan Elves, with Nandor and Laiquendi.

The Sindar are the Eldar who "coming to the shores of Middle-earth, had not passed over the Sea but had lingered on the coasts of the country of Beleriand." Appendix F

The East-elves of Mirkwood were not Sindarin -- yes, Thranduil is, being among "... many of the Sindar passed eastward, and some established realms in the forests far away, where their people were mostly Silvan Elves" Appendix B

But anyway, the question is, did Jackson consider Tauriel Sindarin (an Elda from Beleriand who migrated East to Mirkwood), or one of the Silvan Elves who had remained East of the Misty Mountains during the Great March.

I thought it was the latter.

The Hobbit movies were just an overall disappointment for me. Tauriel was just one of the reasons why. But staying on topic, the primary reason I dislike Tauriel is for the very reason she was present in Jackson's universe in the first place. Her sole purpose was to present the physical trope of a strong, fearless female warrior equal to any elven male. It was to fulfill a supposed role modern audiences might demand. Jackson sold out JRRT, LOTR and Hobbit fans for the sake of uniformed fans and critics.

And just for kicks and another dose of, "let's thumb our noses at canon," Jackson threw in a nonsensical triangular romance...elven prince-dwarf on a mission-commoner she elf. For the many reasons already cited and the sheer obnoxiouness of it. I could do very nicely without her.

Jackson and crew never realized it but they already had a number of strong, smart and fearless female characters if they had just stuck to the intent and the characters as written. None of the additional layers and angst were necessary.

Is it any wonder that anything Jackson and team touches is anathema to most Tolkien purists?

As far as those who watched the movies but never read the books, they was robbed!
Last edited: Jan 27, 2019

I found Tauriel absurd and useless in the story, just as much as Alfrid.

It seemed to me that there was "more of the same" from the preceding LotR movies: love affairs (the absurdly magnified love affair Aragorn-Arwen) and low-level slapstick (I am still horrified how big a fool PJ made of Gimli).

Someone must have thought that movies with love affairs and stupid humor sell better.

Hollywood (and forget all that drivel about PJ being an "outsider") has a one-size-fits-all cookie cutter that practically everything has to be squashed (or at most less than a handful of such cookie cutters). With TV, it's the rut they've gotten themselves into after the "original sin" of letting soap operas into primetime. I mean, I have dark memories (my brain's suppression function hasn't yet erased it) of watching a CGI thingy about a "clan" of velociraptors! After watching slack-jawed for maybe 5 minutes, I had Joan Collins pegged, and Larry Hagman, and ... (no, I do not differentiate between "Dallas" and "Dynasty"). I switched channels before going off to bang my head against a sturdy wall in our apartment (I exaggerate marginally).
The "love triangle?"

Tauriel: If I mention Galadriel here, some may get a shock. But I believe it may have been written explicitly about her that she matched male Noldor (!) in athletic prowess in Aman, and that this could well hold for all female elves. Until they give birth the first time. The extreme form of this was of course Fëanor's mother Míriel, so exhausted after giving birth to him that she abandoned her Hröa and opted for the Halls of Mandos. With the time of TH being 78 years before the final fall of Sauron, things were definitely becoming dangerous - Greenwood had been renamed Mirkwood. So an extreme militarization of Thranduil's realm is not all that implausible.

The one time I would root for the orcs!

And also this one 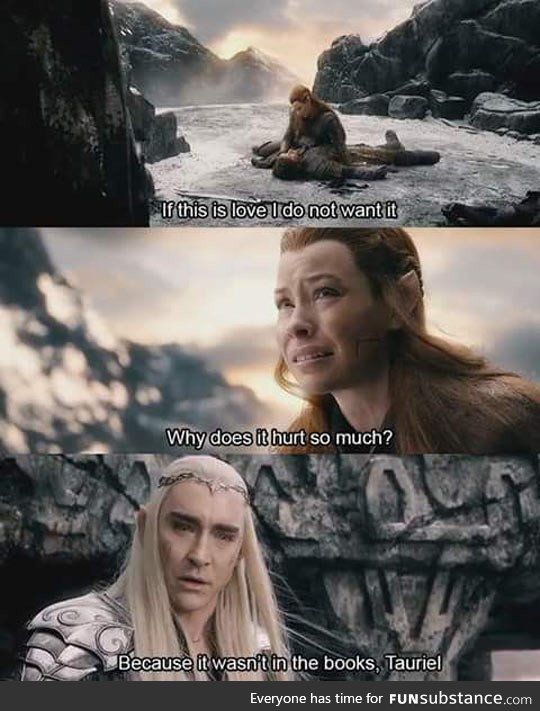 "Why does it hurt so much?" "Because it wasn't in the books."
I suddenly have this wild theory why the budget for LoTR was $281 million, but for TH $745 million:
This actually happened every time the departed from the book, it hurt and they had to cry.
The differences in budgets were all used up for aspirin and hankies!

Olorgando said:
"Why does it hurt so much?" "Because it wasn't in the books."
I suddenly have this wild theory why the budget for LoTR was $281 million, but for TH $745 million:
This actually happened every time the departed from the book, it hurt and they had to cry.
The differences in budgets were all used up for aspirin and hankies!

Olorgando said:
"Why does it hurt so much?" "Because it wasn't in the books."
Click to expand...

Ok, that made me chuckle.

Not sure I've heard about the negative wage impact. Changing labor laws rings a very dim bell.
But then, the claimed budget may have been a means to get such changes effected. The producers might have gone to the government with these numbers and said "Look at all of this money we're going to be spending in New Zealand (probably somewhat lower numbers, claiming that all of the budget would be spent in NZ might be too brazen a lie … but who knows?), can't you give us some relief on a couple of things?"
You must log in or register to reply here.