Rrrrrright … erm … as I'm guessing this is something to do with Heavy Metal, it would be a genre about which I am quite ignorant beyond Black Sabbath (I have head about Metallica …). So, this ol' Australopithecus once again needs help in identifying the artist shown, and the band(s) he may be / have been associated with …

Olorgando said:
Rrrrrright … erm … as I'm guessing this is something to do with Heavy Metal, it would be a genre about which I am quite ignorant beyond Black Sabbath (I have head about Metallica …). So, this ol' Australopithecus once again needs help in identifying the artist shown, and the band(s) he may be / have been associated with …

This one's Metallica and the artist is Lars Ulrich

Well, OK, if it's an own pooch, one wouldn't (actually shouldn't!) want to dye it just for such an event.
To be more color-appropriate, though, they should have borrowed a Scotch terrier, which is black by nature.
To be even more theme-appropriate, they should have opted for a Doberman Pinscher, Rottweiler, black Great Dane (correctly the "Deutsche Dogge", but a fairly new breed; the Danes had nothing to do with it), or perhaps the generally black Newfoundland dog, whose quite shaggy appearance would fit with their cloaked ant hooded apparel. But on the other hand, the Newfoundland dog is one of the most water-loving dogs and among the very best and strongest swimmers, used to rescue people in danger of drowning ...

I have an idea for a deviant fanfic version of the events at the Bucklebury Ferry in "Fellowship".
The Ringwraiths who had entered the Shire had a Newfoundland dog with them as a tracking dog. They arrive at the landing of the Ferry, only to see the boat handled by Merry, with Frodo, Sam and Pippin aboard, heading over to Buckland. The huge pooch catches their scent, "thinks" "Oh, they're crossing the river? No problem, off we go after them!". The Ringwraith "handler", having attached the leash too firmly to himself, finds himself inexorably dragged into the Brandywine, and we are treated to a whole new form of Ringwraith scream - one of pure fear …

For what it's worth: 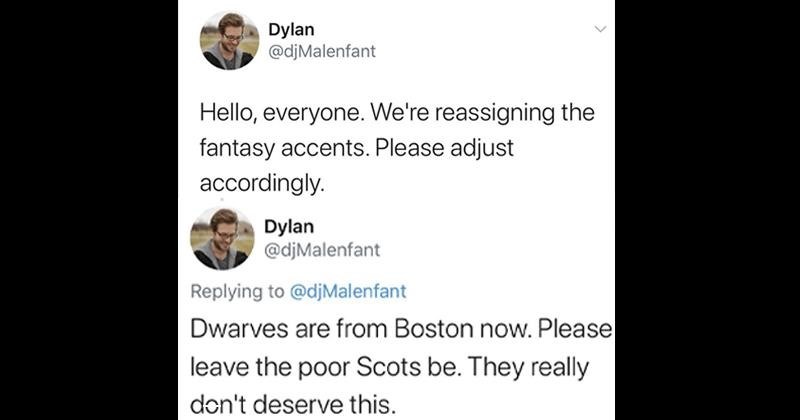 Your DnD campaigns will never be the same.

Previously, on the Joke and Meme thread:

The meme: Now a movie!

These are all courtesy of https://www.reddit.com/r/LOTRholygrailmemes

Squint-eyed Southerner said:
Thanks, but I found it on Imgur. I can't take the credit -- that would be criminal!
View attachment 6475
Click to expand...

The German title of that series kind of "splits the difference"
It's "Mord ist ihr Hobby", so murder is her hobby. (Isn't she supposed to be a professional writer? Oh, wait, of crime stories, and she solves "real-life" crimes …)
But as you should have noticed, the single-syllable German word for murder is the first syllable of Sauron's realm.
JRRT was proficient in more historical (and current) variants of Germanic languages than I am, for certain …

That would be Sam's (quite effective) weapon in Balin's Tomb in Moria in PJ's fanfic, wouldn't it? In the book, Sam used more conventional sharp-edged weapons ...
Last edited: Mar 4, 2020

You must log in or register to reply here.